Join us with Joshua Valler and Nicole Murphy from Barriston Law, for November’s Learning Lab to explore Employees vs. Independent Contractors for Small Businesses.

Joshua Valler
Joshua completed his articles at a local law firm in Barrie and worked there as an associate upon his call to the Ontario Bar. Joshua practices in the areas of general civil litigation and employment law. Born and raised in Barrie, Joshua graduated with honours from the J.D. program at the University of Ottawa’s Faculty of Law. Joshua previously obtained a Bachelor Arts (Honours) from York University where he majored in Law and Society.

During law school, Joshua was a student to the Regional Senior Justice for the Ontario Provincial Court in Ottawa where he was responsible for assisting the Court with research on complicated legal issues. Joshua also continued in the public service by taking on a role as the Special Assistant to the Attorney General and Minister of Justice in addition to his legal studies.

Joshua has appeared at both the Ontario Superior Court of Justice as well as the Ontario Court of Appeal on a wide range of complex legal matters.

In his spare time, Joshua enjoys hockey, baseball, and has taken on leadership roles with several different community organizations, including as Treasurer of the Simcoe County Law Association.

Nicole Murphy
Nicole is an associate practicing in the areas of civil litigation and employment law. Before joining the firm in February of 2022, Nicole began working for the Ministry of the Attorney General as an Assistant Crown Attorney upon her call to the bar in July 2020. Prior to this, Nicole was also a summer student and articling student with the Ministry. Nicole has conducted many trials, pre-trial motions and other criminal and provincial law proceedings as a Crown Attorney in both the Ontario Court of Justice and the Superior Court of Justice and looks forward to utilizing her litigation skills in her new area of practice.

Nicole earned her Bachelor of Arts in Criminology from Ryerson University in 2016 and further went on to attend Osgoode Hall Law School for her legal education, graduating in 2019. Throughout her time at Osgoode, Nicole was a Division Leader and a Board member at the Community Legal Aid Clinic, was an executive member of the Osgoode Peer Support Network, a member of the Osgoode Women’s Network and participated as an adjudicator in the Osgoode Cup Mooting Competition for undergraduate students. Nicole was also a competitor in the province wide Arnup Cup Trial Moot competition.

Nicole is a recurring volunteer with Christmas Cheer Barrie and is looking forward to having the opportunity to become more involved in her local community in her new role at Barriston.

In her spare time, Nicole enjoys reading, spending time outdoors and relaxing with her family, partner, and her bulldog ‘Hank’. 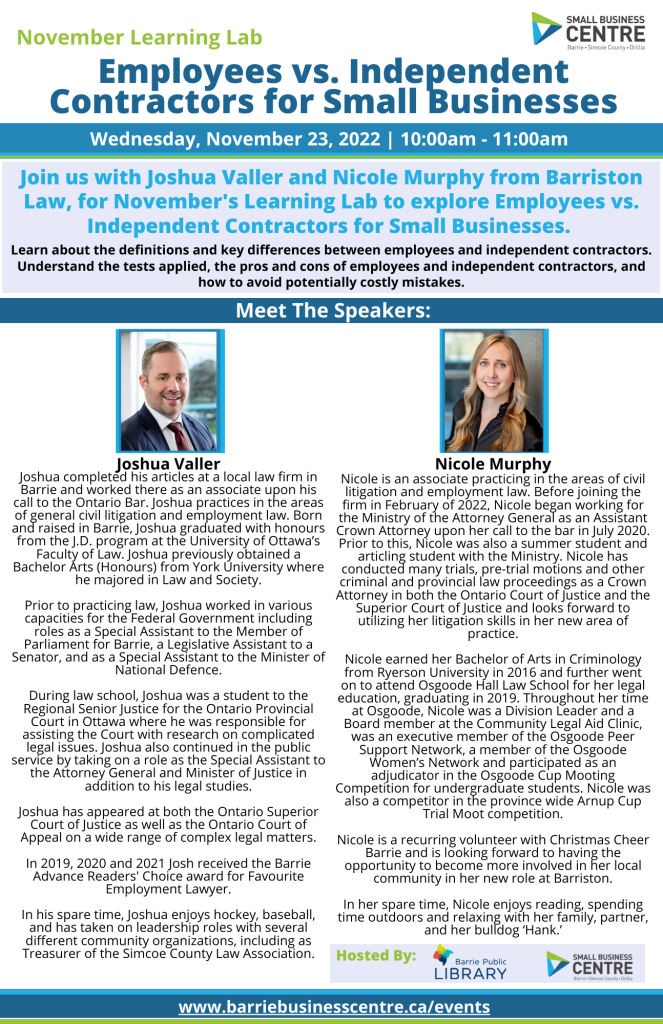 Please Select to Register for this Workshop Either In-Person or Online via Zoom.